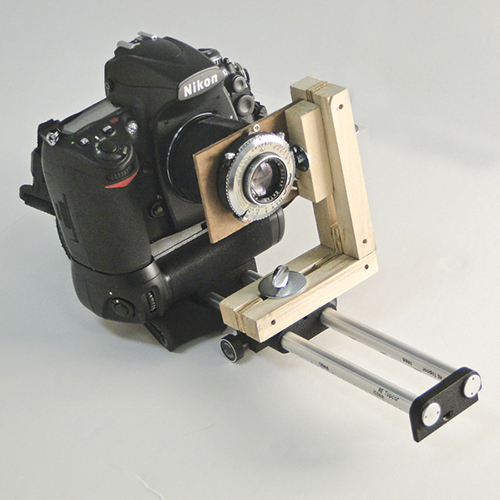 This is a project I’ve been working on for a while now. After finding an old (and when I say old, I mean the 40’s) Kodak Ektar 101mm f4.5 lens for a Graflex camera at work, I decided to try it on my D700. I very simply just held it up to the camera and free lens’d it to see if the flange focal distance was short enough to use on an SLR and sure enough, it was. The lens only needed an inch or so to focus at infinity. That little 10 sec trial made me want more as I have always had a thing for tilt-shift lenses which this lens would make possible for very little cashola. I decided I needed some way to mount the lens to where I could easily focus it and get repeatable results instead of the common plunger cam idea most people use. That led me to an old (when I say old this time I mean the 70’s) macro bellows set-up from topcon (another piece scavenged from work). I found that the bellows rail set-up could be easily modified and the bellows themselves could be used as well. That still left me with mounting the lens to the macro rail, mounting the bellows to the camera, mounting the bellows to the lens, mounting the lens to a lens board, finding a lens board, and then making it all work together to get the tilt, swing, and shift movements. After a lot of head scratching and measuring; I got what you see above and it actually worked! A few random (no, really) sample pictures I have taken with this hand held set-up are below and there will no doubt be more to come. I also realize that I’m not currently using the lens to it’s full potential, but It’s kind of hard to find the time when you have an 6 month old you actually want to be with at all times.

*Update* Since I sold my D700 and don’t yet have a grip for the 5D ii, I haven’t used this rig in a while. I do plan on getting a grip soon though (no pun intended)(well maybe a little bit) and am excited about doing some tilt video!