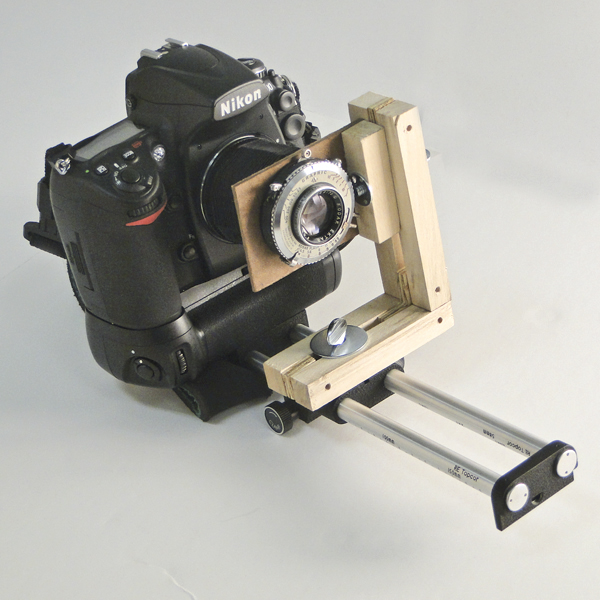 This is a project I’ve been working on for a while now. After finding an old (and when I say old, I mean the 40’s) Kodak Ektar 101mm f4.5 lens for a Graflex camera at work, I decided to try it on my D700. I very simply just held it up to the camera and free lens’d it to see if the flange focal distance was short enough to use on an SLR and sure enough, it was. The lens only needed an inch or so to focus at infinity. That little 10 sec trial made me want more as I have always had a thing for tilt-shift lenses which this lens would make possible for very little cashola. I decided I needed some way to mount the lens to where I could focus it easily and get repeatable results instead of the common plunger cam idea most people use and this led me to an old (when I say old this time I mean the 70’s) macro bellows set-up from topcon (another piece scavenged from work). I found that the bellows rail set-up could be easily modified and the bellows themselves could be used as well. That still left me with mounting the lens to the macro rail, mounting the bellows to the camera, mounting the bellows to the lens, mounting the lens to a lens board, finding a lens board, and then making it all work together to get the tilt, swing, and shift movements.

As soon as I saw the Topcon macro bellows rail, I knew I could use it to focus the lens; now I just needed to modify it. The rails are held together with set screws and the caps on the ends of the rails have spanner wrench holes drilled in them so I knew they threaded into the rails as well. I decided I wanted to use the longest set of rails with the tilt shift so that I might be able to do some macro work as well in the future. A little re-arranging and 20 min later (with a few pictures along the way) I had the rails set-up and the bellows were now off the rails and ready to be used as well. Now I needed a frame.

After looking at an original Graflex Speed Graphic camera, I knew how they originally made everything work, but also knew I couldn’t make my frame out of metal as this was just supposed to be a quick prototype. After a little more research into bellows and medium format cameras though, I decided to make an L “frame” out of wood. The wood I chose was square 5/8″ x 5/8″ by 3′ trim piece from Home Depot and was easy to find. Next I needed to figure out how to attach the wood together and also how I was going to attach to the macro rail to get the movements which was actually much easier than I thought it was going to be. I knew the tripod socket screw size a 1/4 threaded, so I kept with that theme and bought 1/4 thumb screws from Ace Hardware and some large fender washers so that they could be easily tightened, loosened, and re-tightened to any position. Since I was using 1/4 screws, I also got a sheet of 1/4 plywood to cut spacers to place between the L’s so that the lens could shift up, down, left, and right and have room for the thumbs screws without a lot of play.

With the wood and hardware ready, it was a matter of measuring the camera and lens placement in correlation to the macro rail. With the rail attached directly to the camera without the grip installed and holding the lens at it’s standard position, the lens did not have enough vertical down shift movement before hitting the macro rail and the thumbscrew would have been impossible to get to for adjusting horizontal shift and vertical swing. With the grip installed there was more than enough room for everything I needed to happen. Still free lensing with the macro rail attached, I laid the camera on it’s back and measured the approximate distance in mm from the center of the lens to the top of the macro rail. Then I made an approximate measurement from the center of the lens to the outer casing of the lens so that I could know how much space would be needed on the lens board. Using these very simple measurements and the ruler as a guide I made a rough estimate of the dimensions that would be needed to be able to shift the lens up, down, and side to side about 1″. I scribed the wood with the measurements and used a hacksaw for the cuts as that was the easiest way to go. With those cuts, I got the 1/4″ plywood and cut a 5/8″ L bracket and two approx. 3/4″ x 5/8″ straight pieces to join the frame together and act as spacers for the 1/4″ macro rail and lens board screws. With all the cuts made, I drilled guide holes for the self tapping screws with the pieces stacked as they would be when they are assembled so as not to split the wood and then attached everything together with the four wood screws. ( As an FYI, if you’re drilling a hole through wood and want a smooth hole on the backside where the drill bit punches through, just put a 2nd piece of wood below the piece you’re drilling and drill all the way through the original piece and into the 2nd. You should end up with a clean hole in the original piece. )

Now that the frame was built, I needed a way to attach the lens so I again went back to the 5/8″ x 5/8″ wood as a starting point. I found some more random hardware after going through some misc drawers at Ace again and found Tee-nut (not it’s real name, but very similar) to make the hole threaded so that it could be attached and therefore a lens board could be attached to that. I searched online for diy lens boards and didn’t really come up with anything. Then while rummaging for materials, I found an old clipboard that said “I’m it, use me!”. Instead of using that trusty old stickered clip board though, I went to Staples and bought the smallest cheapest one they had for $1.66. I measured the lens to see what the mount diameter was and it came to 29mm? Are you serious? I don’t have a single tool that will drill a hole that size with without it being too big. One trip to Lowes and $6 later I had a 1 1/8″ spade drill bit that would get me to within 1.5mm and that could be taken care of with a half-round file I already had. I then attached the L frame to the modified macro rail and measured how far the lens hole needed to be from the side to make the lens centered when the L frame is centered, transferred the measurements to the clip board, drilled the hole, filed the hole, then cut the clip board down to the pre-measured size. I also made sure there was room for the 5/8 x5/8 board to mount beside the lens because if the lens was mounted on the opposite side of the board, it would be front heavy and automatically tilt down when loosened. I then drilled the holes in the new lens board so that it could attach to the 5/8 to 5/8 piece via wood screws. When I went to mount the pieces together though, the T-nut was too wide and hung over the 5/8 wood. I had planned on slotting the lens board, but after looking at it again, I figured out that if I cut the edge of the tee-nut off so that it mounted flat against the lens board, it wouldn’t turn when the 1/4 thumb screw for the lens is tightened. That’s even better! A few wood screws later and after all that, I now had a way of mounting the lens to the L frame and attaching the L frame to the modified macro rail. Now all I had to do was attach the Ektar lens to the Nikon lens mount via bellows.

Deciding how to mount the bellows to the camera was easy as I already know using a modified plastic body cap would be the easiest way to go and it worked like a charm. BTW, having a lathe at work to cut the hole in the cap is awesome! There were only three screws holding the bellows material with metal compression ring (think giant fender washer) to the macro rail. I easily removed them with a small screw driver and the ring already had the screw holes in it making for a quick template for drilling the holes to re-attach it to the body cap. Mounting the bellows to the lens side proved to be a little trickier. While trying to figure that out, I decided that I needed larger bellows, but I also decided that I needed to at least test what I had so I needed a way to temporarily mount it all together without drilling any holes. This proved easier though because the lens mounts to the lens board using a big tee-nut with spanner wrench holes in a way that the top of the “T” faces the camera. If you flip the “T” nut over, the top of the “T” pushes flat against the lens board which makes the perfect mounting ring for the bellows as the material is a friction mount. Blah, blah, blah, pictures are the only way to make this really understandable, but I didn’t take any. All that is important is that it works and now everything mounts together for the time being.

The the rig complete, I have taken a few test pictures with it here and there but haven’t really gotten the chance to test it out. Even without testing I know that there will be some flaws in it’s current make. One big one is that there’s no way to achieve rear camera tilt and shift which is what would be needed for it to have all the actual view camera movements. Another flaw is that it is not tripod mountable in it’s current state. I have thought of a way to fix both of those and that is a large L frame to hold the camera, but that would also take away the portability and that’s not something I’m currently ready for as I have a hard enough time just finding a moment to use the current set-up. Another flaw that that the bellows were designed for 35mm straight through movement and just aren’t large enough which occasionally causes vignetting. I think new diy leather bag bellows would do the trick, but again; I have to find the time to make them.

Over all, I call this project a success even if all the pictures I take with it only end up being suckcessfull.